Rounding off an exhausting list of new football boots colourways from adidas comes a colourway that’s exclusive to the ‘standard’ F50 – but is available in on both the synthetic & leather uppers; the adidas F50 adiZero – White/Anodised Blue/Slime ! 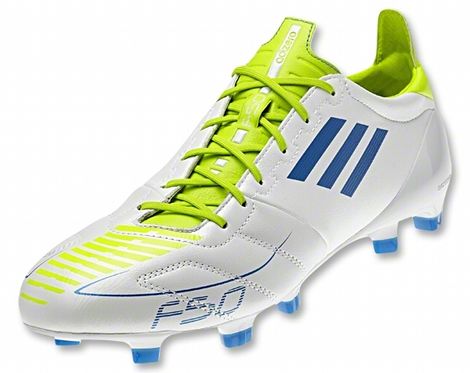 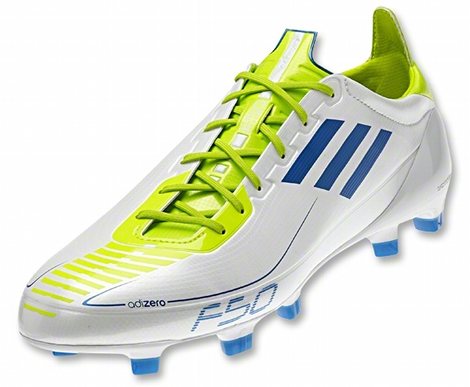 Now, if this colourway looks strangely familiar to any of you, then your deja vu is not misplaced, as it has been available exclusively through adidas’ miadidas customisation service for some time now.

Though in an odd move by the Three Stripes, whilst the adidas F50 adiZero – White/Anodised Blue/Slime is still the only adiZero football boots available on miadidas, it is now also available on general release (for £40 cheaper, we might ad).

We can only presume that the demand for the adidas F50 adiZero – White/Anodised Blue/Slime caused adidas to consider launching this sleek colourway to general release, and it’s impending release will mark the launch of some new colourways and options to the miadidas service. Well, we hope that’s the case anyway!

As for the colourway itself, despite it’s strange launch, we think it’s one of our favourite adiZero colour schemes since the launch of the redesigned upper in January! The sleek white upper is brightened up by the'  Anodised Blue/Slime giving this adiZero a fun summery look that doesn’t take itself too seriously. 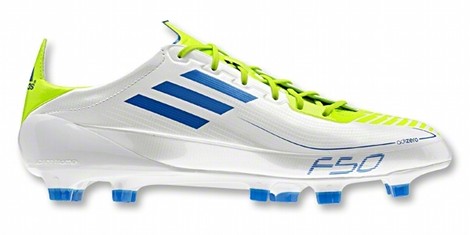 The slightly-lighter blue studs are also a neat touch that, again, adds to the bright and fun feel of this impressive colourway.

Whilst we’re not sure how many players will adopt this colourway in the top leagues in Europe, we expect that this colourway could prove popular amongst MLS fans and supporters as they’re one of the few football boots ever to match the bright-green Seattle Sounders home kit!

As mentioned in the opening paragraph, the adidas F50 adiZero – White/Anodised Blue/Slime won’t be appearing on the adiZero Prime (for the time being) , and will instead be available solely on the leather and synthetic F50 adiZero – marking the first colourway that has been exclusive to the ‘standard’ adiZero and appeared on both the leather and synthetic versions since the launch of the Prime.

We think this colourway would definitely be a hit amongst many fans of the adiZero if marketed correctly and put on the feet of some top players. Whether adidas will do so is something that we’ll just have to wait on and see!

The adidas F50 adiZero – White/Anodised Blue/Slime will launch at retail on the June 1st 2011, with pre-orders opening this week. Will you be among those buying?

Or will you wait until closer to the start of the new season before investing in a pair of new football boots?

Tell us in the comments below!

Written By
Kyle Elliot
More from Kyle Elliot
Mesut Ozil unleashes the Predator(s) within as he laces up his new...
Read More