Adidas and UEFA have unveiled the ‘Europass’ as the official matchball for Euro 2008.

The Adidas ‘Europass’ was yesterday unveiled as the official matchball for next year’s Euro 2008 championships at the finals draw in Lucerne.

Background
The name “Europass” refers to the common “Euro” pass between the two host countries of Austria and Switzerland. It also represents every pass the players will make on the pitch during UEFA Euro 2008. Last but not least, it signifies the co-operation among all the fans who will make their way to Austria and Switzerland for the final competition.

The ‘Europass’ combines tradition with modernity. Its classic colouring – a white base colour with black dots – calls to mind the balls of bygone decades, yet its bonding with round dynamic elements in silver and red results in an innovative and very modern design. The national flags of both countries have also been integrated into the ball design, with eight circles in a subtle silver effect. The 12 black dots contain individual graphic elements developed by UEFA to accompany the Euro logo. These elements stand for passion, friendship, action, training, fans and the winning goal, which appear as watermarks in the black dots of the Adidas ‘Europass’. 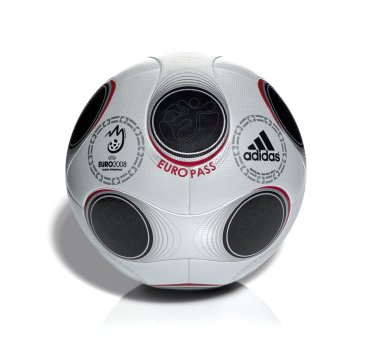 Technical Details
The ball’s new surface structure, utilising existing Teamgeist technology, is constructed out of 14 panels using revolutionary thermal bonding technology, allowing players to control and direct it perfectly in all weather conditions. The revolutionary PSC- Texture consists of a sophisticated and extremely fine structure on the ball’s outer skin that guarantees optimum grip between football and football boot. The new ‘pimple’ effect helps enable truer flight, working on the same aerodynamic principles used in golf ball design. Players can benefit from improved power transmission, greater swerve and increased accuracy on the pitch. And for the goalkeeper too, providing a much better grip between glove and ball, substantially improves his catching of the ball.

In testing the ‘Europass’ football, the Adidas Innovation Team, has found that the new 14-panel configuration, featuring fewer seams, makes the ball perform significantly more uniformly, no matter where the ball is hit. Scientific tests also confirmed that ball is more round, precise and consistent than any top competitor match ball.

Written By
Felipe
More from Felipe
Introducing the third colourway of the adidas adiPure III - a striking...
Read More