As revealed here yesterday on Footy Boots (Europass) the Adidas Europass has been unveiled as the matchball for the 2008 European Championships in Austria and Switzerland.

Adidas has been producing match balls since 1963 and believes after two years of extensive research and development, the Europass is the best football ever!

So how can a football’s quality be measured?

FIFA has designed a quality concept to guarantee the highest standard of balls for the best players in the world. Only after a series of stringent tests is a ball awarded the “FIFA Approved” hallmark.

The Adidas Innovation Team has rigorously tested the new Euro 2008 match ball, firstly under laboratory conditions, and later with professional football players and clubs on the field of play. Scientific tests were conducted in the Adidas football laboratory in Scheinfeld and also by the Sports Technology Research Group of the University of Loughborough, one of the leading institutions of its kind worldwide.

Tests confirmed that Adidas Europass does not only meet these “FIFA Approved” standards, it exceeds practically all of them.

The robotic leg: The Adidas football laboratory in Scheinfeld features a high-tech robotic leg which is used for a variety of ball tests. The machine is able to repeat an identical kick in the exact same angle and with exactly the same speed and power, time and time again. A high-speed camera is set up parallel to the impact to analyze the impact on the ball. The new 14-panel configuration, featuring fewer seams, makes the ball perform significantly more uniformly, no matter where the ball is hit.

Circumference test: A consistent circumference is important to allow optimal control during dribbling or driving a football. In order to calculate the average circumference, each individual match ball is measured at 10 different points.

Permanent roundness test: Only a perfectly round ball allows a player to fully capitalize on his skills. The more perfect the sphere is, the more balanced a ball will be in flight, the higher will be its accuracy and the predictability of its flight. The panel shape harmonizes the energy displacement and minimizes the amount of corners, while the larger panels allow for a cleaner kicking area.

The diameter of the ball is measured in 16 different places, after which the average is calculated. The difference between the highest and the lowest diameter must be within very strict limits. 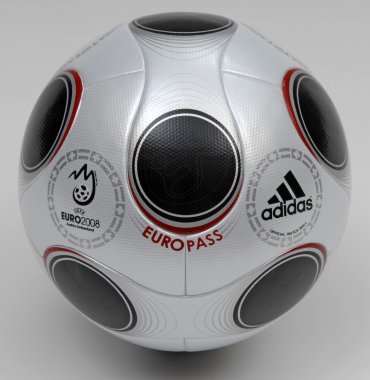 Water absorption test: A wet and heavy ball behaves quite differently from a dry one. It flies through the air more slowly, has a low bounce and is more difficult to curl. Adidas’ patented Thermal Bonding technology makes a football virtually waterproof. As a result the new Match Ball shows completely homogenous performance characteristics when playing in dry or wet conditions.

For the water absorption test, the ball is pressed and rotated in a container of water 250 times, after which the ball will be weighed. The water will also be weighed before and after the water uptake test.

Perfect weight test (420 – 445 grams): Each professional game is played with a number of balls. These different balls all need to perform the same. Consistency in weight is crucial. If the ball is too light or too heavy, it might move unexpectedly in flight.

Shape & size retention test: During an average game the ball is kicked approximately 2,000 times. However, in the last minute of overtime, the ball needs to perform identically to the way it did in the first minute of the game.

In order to test the shape and size retention, the ball is fired against a steel plate 2,000 times at 50 km per hour for the FIFA Approved hallmark. After this test, only minimal changes in air pressure and roundness are allowed and the air valve and stitching must remain undamaged.

Drum test: The drum test was developed by Adidas to guarantee high quality and durability of the printed surface, the unique design and look of the ball. Using the ‘under glass print’ – where the design is printed on the under-side of the transparent surface material – in the construction of the Adidas Europass equips the ball with an exceptionally resistant surface material and ensures that it maintains its unique appearance for longer.

Uniform rebound test: Players need to be able to anticipate how the ball will respond in order to control a pass using their chest, thigh or foot.

For this test, the ball is dropped ten times onto a steel plate from a height of 2 meters. The difference between the highest and the lowest bounce must be no more than 10 cm.

Loss of pressure test: If the ball loses air during the game, it will be difficult to predict and may not respond consistently, making long passes and deep crosses almost impossible.

For this test, the ball is inflated fully and three days later its air pressure is measured. It must not have lost more than a specified percentage of its air.

These tests confirmed that the Adidas Europass is more round, precise and consistent than any top competitor match ball.

Click here for more details on the Adidas Europass