Europe’s top footballers, who sadly don’t include any from Scotland, Northern Ireland, Wales, the Republic of Ireland or England (cheers Steve) now know which ball they’ll be playing with at Euro 2008 should they qualify for the final.

It’s called the Adidas Europass Gloria and was unveiled by Adidas Chairman and CEO Herbert Hainer who presented it to Uefa President Michel Platini. 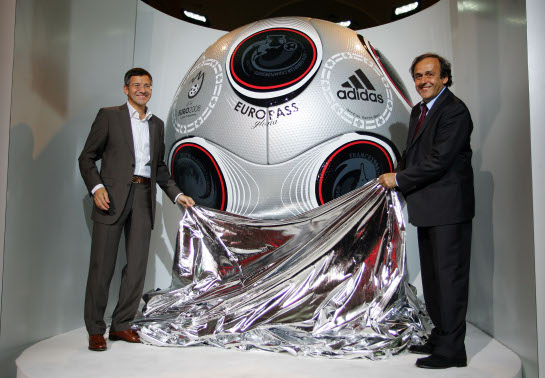 The suffix Gloria is surprisingly to all of us at Footy Boots not taken from Laura Brannigan’s platinum selling single from 1982 (shame that) but it instead stands for the fame and glory that will be enjoyed by the winner of the tournament.

In eight white circles, the national flags of Austria and Switzerland have been integrated into the silver ball design. The twelve black dots contain the Henri Delaunay Trophy as well as graphic designs typical of all the nations that have won the trophy since the European Football Championships began. 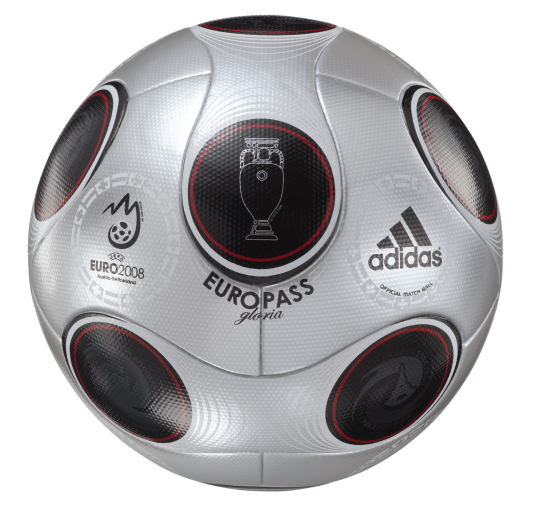 Like other leading Adidas balls, the Europass Gloria is is constructed out of 14 panels using revolutionary Thermal Bonding Technology. This combined with the new PSC-Texture surface structure gives it perfect handling characteristics and allows the players exceptional ball control. The unique outer skin improves power transmission, creates greater swerve and increases accuracy on the pitch, in all conceivable weather conditions.

Adidas has supplied tournament balls to Uefa and Fifa since 1970 and this year was the official ball manufacturer for the African Cup of Nations.

Rumours that the ball in 2018, should England win the right to host the World Cup, will be called the Tracey have so far been unsubstantiated.