No stranger to bright colourways, the adidas F50 adiZero might have out-done itself on this latest edition as the Three Stripes launch what is arguably the brightest adiZero colour-up this generation; Electricity / Hero Ink / Silver.

Electricity has fast-become one of adidas’ signature colours for footballing footwear (with some iconic ties to the Predator line), but rarely has it looked better than on this latest F50 adiZero.

Contrasting with the purple ‘Hero Ink’ heel counter and quarter in the back of the boot, the Electricity / Hero Ink / Silver F50 adiZero is a classic one-two combo of an eye-catching forefoot colour and darker detailing 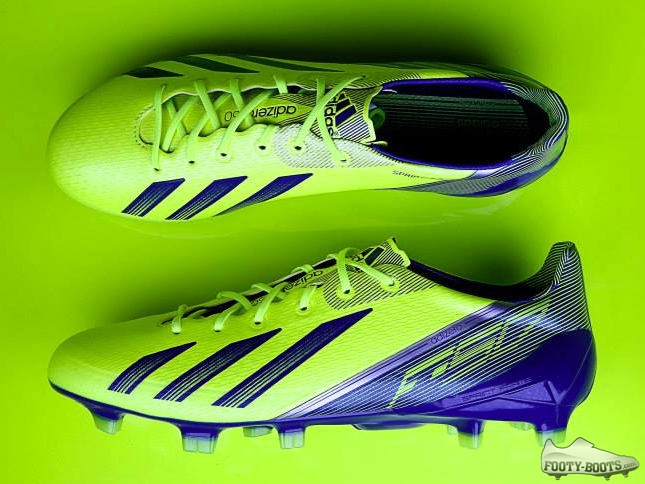 If you follow us on Twitter, you’ll undoubtedly have noticed a certain Mr. Bale give these new boots an airing as he was presented as Real Madrid’s latest world record signing. 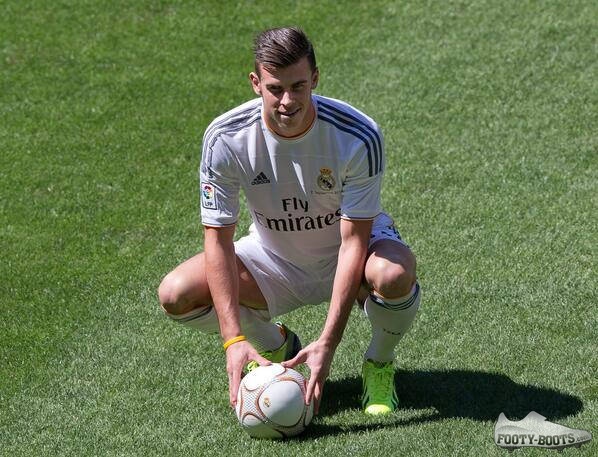 The Welsh winger took to the pitch in front of thousands of Madridistas at the Bernabeu wearing the latest adiZeros – an undoubted PR masterstroke from adidas.

Seeing them in the Spanish sunshine, we were definitely struck by how good the Electricity / Hero Ink / Silver F50 adiZero look on-pitch, but reckon they’ll be at their best under the floodlights on Champions League nights. 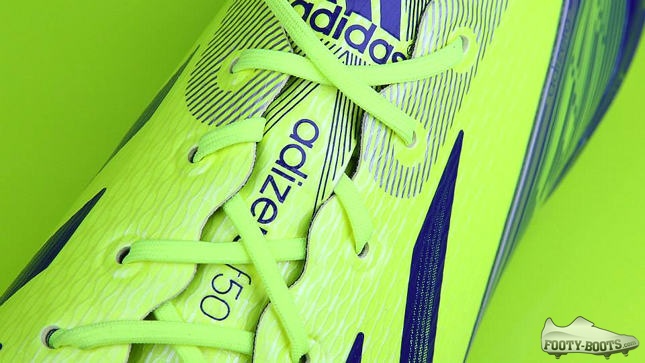 Currently adidas’ lightest boot, the F50 adiZero tips the scales at a mere 165g. Now in it’s third official generation, the adiZero is packing more technology than ever before into that minuscule weight point.

This year’s SprintSkin upper is crafted from a DualMax synthetic upper, offering super-thin contact between foot and ball, as well as increased durability.

Coating that is the SprintWeb: a 3D texture that envelopes the forefoot of the synthetic version of the shoe, this added grip offers a more natural ball contact in wet weather. 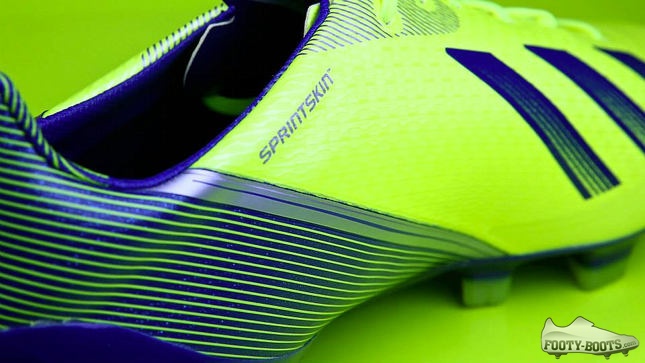 Inside the boot, internal TPU support bands lock the foot in place and support the foot and upper – this additional enforcement allows the adiZero to offer the same level of biomechanical support to the foot as a thicker-uppered boot when making sharp lateral movements.

All this is built upon the SpintFrame – the revolutionary chassis that made the adiZero’s weight point possible. Constructed of TPU, this outsole offers supreme comfort with a structured midfoot and flexible toe-off area.

Throw in Traxion 2.0 triangular studs and compatibility with the miCoach Speed_Cell and you’ve got one of the most well-rounded boots in the game.

Available to buy from today, expect to pay around Ł154.99 and $209.99 US depending on stud choice and whether you plump for a synthetic or goleo leather upper.

Let us know what you think of this release on the boot-o-meter!

LIGHT-BRIGHT: ADIDAS’ NEW ELECTRICITY F50 ADIZERO, 8.8 out of 10 based on 34 ratings https://www.footy-boots.com/wp-content/uploads/2013/09/adidas-f50-adizero-electricity-hero-ink-silver.jpg