adidas have unveiled their new adidas Champions League Ball for the 2011-12 UCL season, and it may well be their most colourful yet! 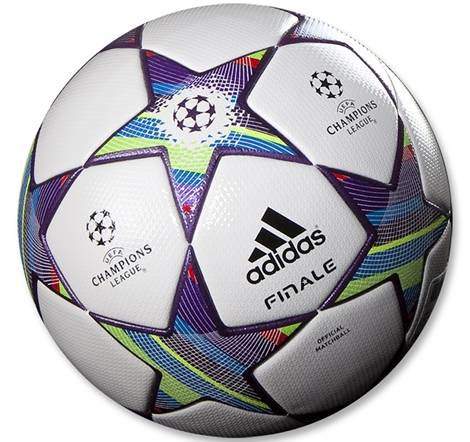 Building upon the Finale template that has seen their last two Champions League Ball go down as such rousing successes, the new 2011-12 edition is more of a colour update rather than a new ball entirely.

But what a colourway it is! Each star-shaped panel of the new Finale is an explosion of colour, streaking across the panels in a design like nothing we’ve seen before!

As the flagship adidas ball for the new season, the adidas Champions League Ball also features all of the technical enhancements and features we’ve come to expect from top-level adidas footballs.

Thermally-bonded star-shaped panels help make sure the ball takes on no water, even on sodden pitches, and retain it’s shape for a longer life.

Every panel on the ball is also covered in a special textured coating, which not only enhances contact with the ball – but also improves the aerodynamics of the new adidas Champions League Ball for a truer flight when struck.

It goes without saying that as the official matchball of the UEFA Champions League, the ball also lives up to the stringent quality control standards enforced by FIFA to make sure it’s up to standard as a ‘match ball’.

This new adidas Champions League Ball will be used by every team in the competition when the USL starts up again later this year, with the exception of Barcelona, who as Champions, will be allowed to use the Finale Wembley as a mark of their status as reigning Champions.

adidas’ new range of Champions League gear is set to reflect the bold choice of statement colours on the new adidas Champions League Ball, including a range of training gear, football boots and Goalie gloves, as previewed here on Chelsea’s Petr Cech!

What do you think to this choice of colours by adidas? Excited by something new? Or would you prefer something more ‘serious’ for the biggest prize in Club football?