adidas have announced today that they have secured a renewal of their technical sponsorship deal with Bayern Munich. 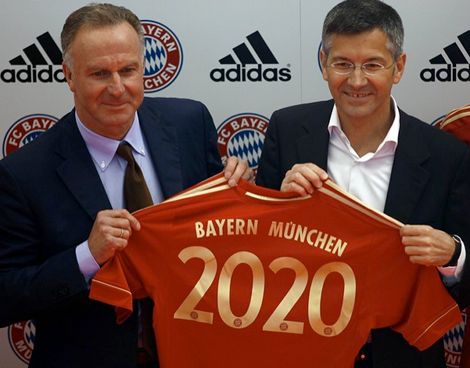 In one of the longer-term sponsorship deals that we’ve ever seen, adidas’ new deal deal ensures that the Bavarian club will be wearing the iconic Three Stripes of adidas until the 2020 season, giving the two parties an 8 year agreement.

adidas will have been keen to reach an understanding with the German club, as they have a strong association with German soccer and a leading presence within the Bundesliga’s top teams.

This latest renewal will see the partnership between adidas & Bayern Munich pass the 50 year mark, making it one of the longest-running in world soccer.

In the same press release adidas also revealed that the new Bayern Munich Home Shirt will hit retail on May 13th, giving the fans something to look forward to after a largely frustrating 2010-11 season.

No figures were mentioned, so the amount that adidas remains confidential. The money involved may not be as high as you might think, however, as adidas AG owns a 9.4% stake in'  FC Bayern Muenchen AG, the club-controlled company within Bayern Munich FC which operates the club’s commercial soccer department.

The deal will likely mean that Bayern will continue to be one of adidas’ ‘go-to’ clubs when testing new football boots, with Bastien Schweinsteiger in particular being a favourite for adidas when they require feedback on new football boots.

We think it’s a great deal for both parties – we couldn’t imagine the classic Red & White Bayern Munich Jersey without the Three Stripes of adidas!