adidas’ ‘All In or Nothing’ mantra is strikingly visualised on the adidas Battle Pack: their collection of World Cup football boots.

With the domestic seasons all but over, all eyes will start to drift towards the World Cup this summer, which is where you’ll find all adidas stars competing in the tournament wearing these bold, tribal-influenced football boots.

‘All In or Nothing’ has been adidas’ motto for players to take to Brazil: fight or flight, do or die; either give it your all, or don’t get on the plane.

Deliberately aggressive and always engaging, that spirit is embodied here on the adidas Battle Pack.

Each boot is exactly 50% Black and 50% White, embodying the idea that it’s one or the other in Brazil this summer – if you’re on the pitch at the World Cup, there’s no room for players in the middle ground. 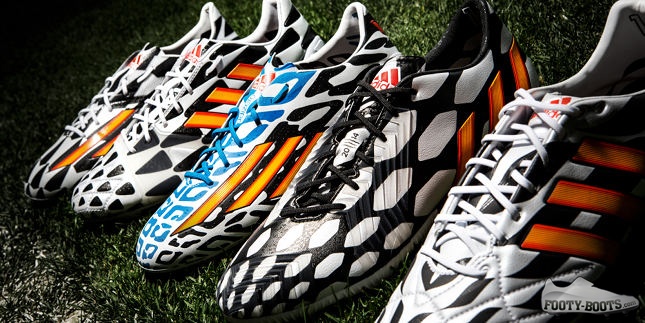 Each boot carries it’s own unique pattern designed to embody the sort of player that will wear it and the attributes that each cleat brings to the pitch.

They are united in deliberately disruptive patterns that will likely look outstanding on the pitch this summer, and are inspired by the face-paint of native warriors and the iconic pavement patterns of ancient Mesopotamia perfected on the Copacabana beach.

We think we’ll stick to the ‘Warriors’ angle over the paving one, mind.

Most interesting for us is the adidas Battle Pack Predator: quite obviously not the previous model, this new incarnation remains nameless for the summer, existing only as part of the Battle Pack rather than a standalone release, creating a unique talking point for boot fans this summer before adidas give the Predator it’s due after the World Cup.

After redefining lightweight football boots back in South Africa four years ago, the adidas Battle Pack F50 adiZero is the culmination of three generations of revisions that make these F50’s the lightest ‘full’ release edition of the adiZero to date.

You’ll find them on the feet of Arjen Robben, Karim Benzema and Luis Suarez amongst others this summer.

The adizero f50 Messi is the only exception to the adidas Battle Pack‘s black-and-white only dress code, with an added blue and white colourway, inspired by the national colours of Leo Messi's native Argentina.

Last summer’s breakout new silo for adidas, the Nitrocharge is very much an established part of the adidas family now, with featured technology like the EnergySling and Energypulse becoming firm favourites amongst wearers.

Players that will wear the adidas Battle Pack Nitrocharge this summer will include Dani Alves and Javi Martinez; two players who will fancy their chances at lifting the trophy in July.

The adidas Battle Pack adiPure 11pro features a graduating pattern across the upper, helping highlight the quilted forefoot vamp and focus on touch and control with it’s more refined pattern.

adidas say that the 11pro is built around the needs of the ‘complete footballer’, and players that fit that bill this summer will include Philip Lahm and Frank Lampard. 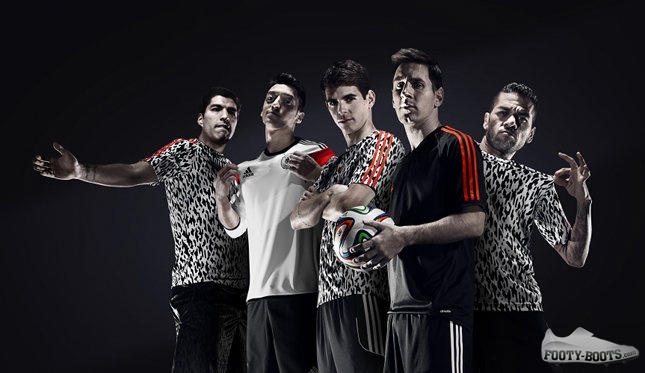 The adidas Battle Pack might be their World Cup football boots, but you can see them first in the Champions League final in Lisbon as Real Madrid and Atletico Madrid face off for the biggest prize in European club football.

After that, expect these boots to be inescapable on the pitch, with adidas hoping for a unified, highly-visible look to their footwear in Brazil.

Stick around for the next week, as we’ll be detailing each of the Battle Pack football boots in full.

In the meantime, what do you think to this selection of cleats from the Three Stripes?

Written By
Kyle Elliot
More from Kyle Elliot
The stripes are back as Nike pull back the curtain on the...
Read More