The adidas Battle Pack launched with a bang yesterday ahead of the World Cup this summer in Brazil.

Perhaps taking a lot of people by surprise with it’s bold black-and-white designs and deliberately visually-aggressive styling, the adidas Battle Pack is one of the biggest generators of conversation we’ve had on the site and on social channels.

And with every good conversation comes great questions; so we went to adidas’ Gerald Kuhtz, lead developer on the Battle Pack. 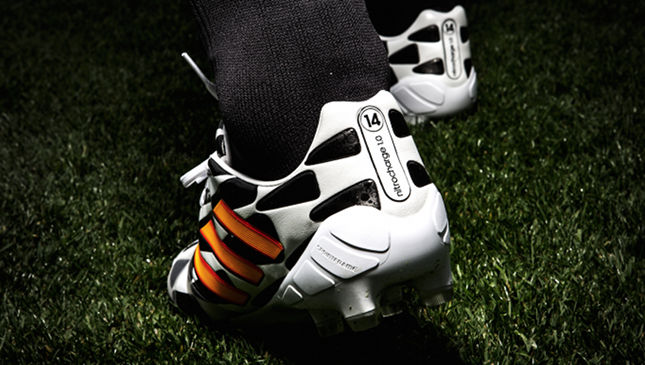 What is the rationale behind creating Battle Pack?

We want to create a big and lasting impression on the World Cup, the world's largest football event and the ultimate platform for the adidas state-of-the-art footwear.

It's important to tell a unique story from adidas' perspective with highly visible boot designs that have never been seen before.

We want to become the talk of the World Cup by being bold and provocative, giving fans a product they can have an opinion about.

With a collection that is only worn during the Champions League Final and World Cup, Battle Pack is going to command attention.

Why did you choose the black / white colouring?

The colouring ties in to the wider World Cup campaign, “all in or nothing” €“ it is do or die at the World Cup.

We want the boots to stand out on the pitch €“ everyone expects a tournament in Brazil to be full of green, yellow and other bright colours.

We felt this was predictable so we chose to be different with each boot exactly 50% white and 50% black.

Why are the stripes orange / gold?

The orange / gold adidas three stripes represent the gold of the World Cup trophy, and the fire from the football gods, as the players prepare for battle. 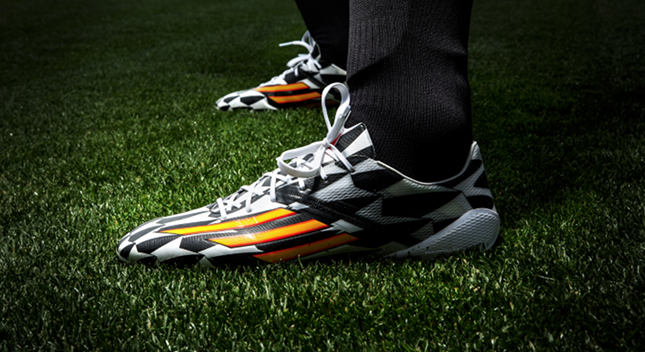 Why does the adizero f50 Messi have a different colourway?

Leo has been given a unique blue and white colourway to symbolise the colours of his native Argentina.

Where did the name come from and how did this inspire the design?

The name Battle Pack symbolises the story of the boots.

Apart from the black and white elements, the boot design has been inspired by the war paint patterns on the faces of native warriors from history and legend.

€Battle Pack' will intimidate opponents as the players fight for victory in Brazil.

Are there any new features?

Predator is the boot with the most new developments, we have added a friction control element that extends to the outsole to guarantee more control.

Also predator is the only boot that is white on black, as all the others have a black on white design.

This is in line with our release of a new predator boot at every World Cup since 1994, so it is important to us for the predator to have a point of difference.

How would you want the boots to be remembered?

We want the boots to be remembered as synonymous with the World Cup in Brazil and for igniting adidas’ new era in football.

Our aim is for Battle Pack to be seen as iconic and memorable to all football fans around the world.

How long have you been working on Battle Pack?

adidas has been working on Battle Pack since April 2012, so over two years.

We spent longer than usual on this range as it is such a special collection for this once-in-a-lifetime tournament.

For the initial design phase we had two adidas teams working independently, one at adidas HQ in Germany and the other in Portland, USA.

The boot designs have been tested extensively to ensure they stand out on pitch.

Have you had any feedback from the players?

The boots were kept quite secret for a while but now that the majority of players have seen them they have been really impressed and inspired by them.

The entire roster of adidas players will be wearing them at the World Cup and the reaction in the testing and delivery of the product has been incredibly positive.

Written By
Kyle Elliot
More from Kyle Elliot
It's Blue... What else did you expect? Chelsea FC's new look is...
Read More