Whilst there aren’t many myths and legends in the world of football boots, one of the most popular is that somewhere underneath their' Herzogenaurach headquarters, adidas have a vast archive of every product they have ever released. 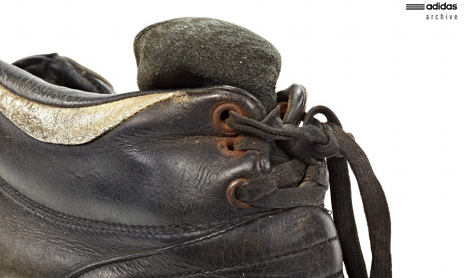 Despite hints and hushed whispers from adidas executives, adidas have kept their archive a closely-guarded secret – until this week’s reveal of the adidas digital archive.

From one-off oddities like props made for movies, to player-worn prototypes and football boots, the adidas archive is to football boots what Willy Wonka’s Chocolate Factory is to chocoholics.

But best of all, the adidas archive is chock full of weird and wonderful football boots, brought to life with comprehensive notes, videos and HD photographs.

Here’s some of our favourite pieces from the archive: 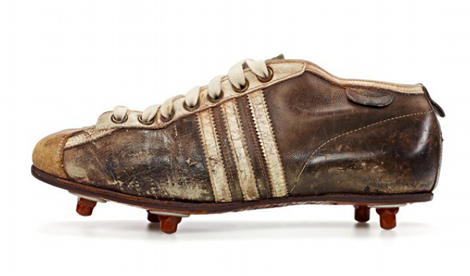 The Argentinia was revolutionary. Until that point, football boots were primarily designed to protect the foot. The boot, which was developed for the German national team, was the first to fulfil the requirements which still stand for football boots today: It was lightweight and flexible, and provided good contact with the ball and secure contact with the pitch.

Significant improvements included a narrower last and a lower-cut upper. The hard toe cap was dispensed with, the outsole was flexible and the boot featured easily changeable thread inserts, which were pressed through the insole and outsole from the inside (1952 patent), along with slim 18 mm nylon screw-in studs. 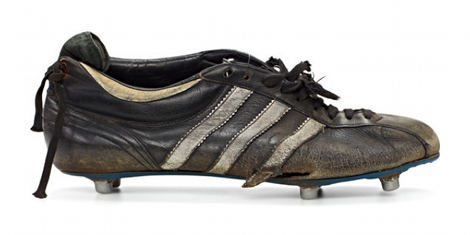 In February 1965, Uwe Seeler tore his Achilles tendon. At the time, this would have usually signalled the end of an athlete's career. Adi Dassler designed a special orthopaedic shoe which enabled the athlete to play again as early as August of the same year. It was wearing this shoe that Uwe Seeler scored the deciding goal at the World Cup qualifying match against Sweden on 26 September.

The Achill's heel construction with lacing and built-in cushioning takes the pressure off the rearfoot and the Achilles tendon and provides additional support. It has been worn by athletes suffering from problems such as bursitis, Achilles tendon injuries and heel spurs.
Due to the integrated heel pad, the shoe had to be worn half a size up. 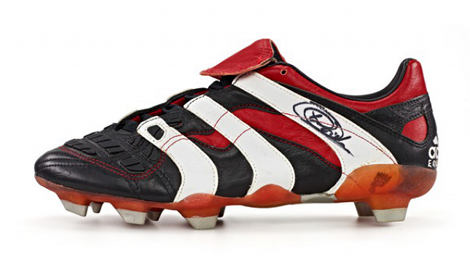 Signed by French Football Legend – no, scrap that – international football icon Zinedine Zidane, the adidas Predator Accelerator is a boot that has truly stood the test of time and is among the pantheon of great Predators.

‘Zizou’ wore this model as he and the all-conquering French team of the era lifted the World Cup in 1998, and won a scudetto with club side Juventus.

But don’t let us have all the fun for you, head on over to adidas-archive.org and explore some remarkable pieces of football history for yourself.