If you’re after something a little bit more eye-catching than usual, but don’t want to buy into all the brazen gimmicks of  flashier football boots – look no further than these Champions League Adidas adiPure III‘s! 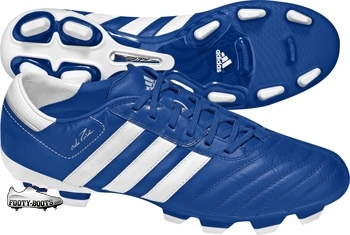 The new Blue/White adidas adiPure III‘s should come as no surprise to those who have seen either the Champions League Predator_X‘s or F50 adiZero – adidas must be feeling blue!

These cool new adiPure III‘s feature all the things you’ve come to live about the series, but wrapped up in this bold blue package. Meaning comfort and control are still high on the agenda for this classically-style football boot.

Some of the more eagle-eyed boot spotters among you might have caught a glimpse of these ‘Blue Beauties‘ back when the new Chelsea home shirt first launched back in May – so it’s probably no coincidence that these boots match the famous Chelsea blue home kit.

You can expect to see these on the feet of players such as Frank Lampard, Kaka and Inter Milan’s Diego Milito when they launch on July the 1st!

ADIDAS ADIPURE III CHAMPIONS LEAGUE BLUE BEAUTY, 9.3 out of 10 based on 25 ratings

Written By
Kyle Elliot
More from Kyle Elliot
It's review time again! This time, it's our long-awaited hands-on with the...
Read More