After launching a whole new adiZero and two new Predator colourways, adidas have chosen the adidas adiPure 11pro – White / Red / Black  to lead the line for the adiPure range this winter! 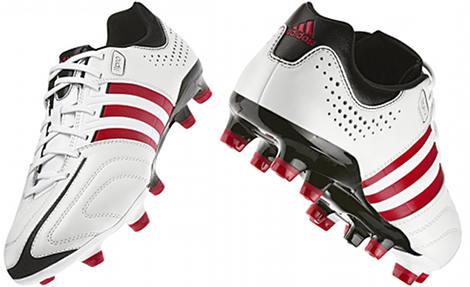 Whilst some players have moved away from the silo to the leather adiZero and superb Predator LZ, the adiPure range still has a surprising number of leading advocates left at some of Europe’s top teams.

Given that some of those players include and Arsenal’s Santi Cazorla and Bayern Munich duo Lahm and Schweinsteiger, the adidas adiPure 11pro – White / Red / Black is the perfect colourway to compliment the kits of those players!

Whilst a classic white adiPure at it’s core, we’re seriously liking the adidas adiPure 11pro – White / Red / Black – though that might just be because of how much they remind us of the White/Black/Poppy adiPure III!

A little bit controversial amongst aduiPure purists (adiPurists?) the adidas adiPure 11pro uses the same Taurus leather as the Predator_X, for a more water resistant forefoot – making it the first time an adiPure has featured zero K-Leather in it’s construction.

But whilst it loses heritage, it also helps the boot shed grammes; Taurus leather is lighter than K-Leather, which works with the synthetic midfoot and heel to give the adiPure 11pro a weight point of just 226g / 8.2oz.

Integrated into the adidas three stripe branding in the midfoot is the 360-degree support saddle. Working with the lacing to pull the midfoot of the boot flush to the foot, heel slippage is reduced and stability is increased.

The adidas adiPure 11pro is also the first adiPure to be miCoach compatible, allowing amateur players access to professional-standard performance-metrics.

Give us your thoughts on the new adiPure in the comments, below!