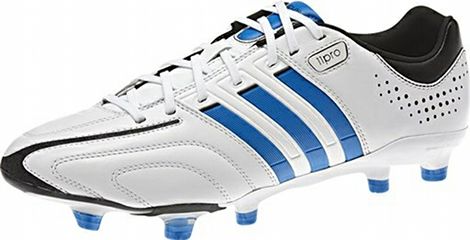 As far as looks go, the adidas adiPure 11pro – Running White / Bright Blue / Black is – in our opinion – a bit of a stunner. The White base with Black trim is something that’s been a part of the adiPure line since the very beginning, whilst the Bright Blue picks out the adidas branding and studs nicely.

The adiPure 11pro – Running White / Bright Blue / Black picks out the ankle and perforation on the heel cup in black at the back of the boot, whilst the DuraCoating on the toe is coloured to match – bringing a nice sense of balance to the boot. 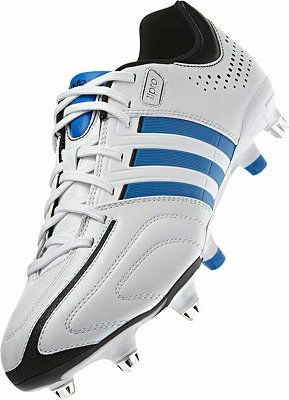 Controversially, the adiPure 11pro is the first to avoid natural leather entirely, instead opting for the Taurus leather adidas brought in on the adiPower. Whilst this is something of a turn off for those who prefer the Kangaroo leather of previous incarnations, adidas have engineered their ‘heritage’ line to still give that highly-sought ‘Glove-Like’ fit.

Picked out in Bright Blue on this model, the adidas adiPure 11pro boasts a 360-degree support saddle; integrated into the three stripes, this system pulls the boot snug to the midfoot, locking the boot in place. 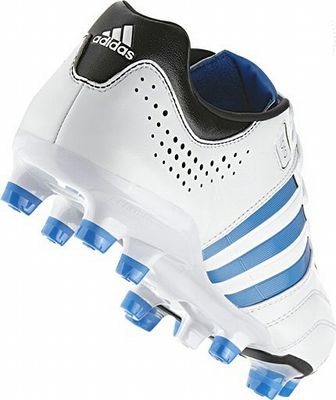 This is also the first adiPure boot to utilise the now-all-encompassing SprintFrame that adidas introduced on the adiZero. This system drops the weight of the 11pro to 243g / 8.6oz and provides exceptional support when moving at speed.

The Traxion soleplate gives great support and maneuverability, whilst the dual-cushioning offers additional comfort under each stride. The soleplate also has a FlexZone under the toes for optimum responsiveness, whilst the 11pro brings miCoach compatibility to the adiPure line for the first time.

Written By
Kyle Elliot
More from Kyle Elliot
Your chance to win a true collector's item - a Replica of...
Read More