Whilst it’s probably fair to say that the 11pro isn’t the most popular boot in adidas’ line-up, you can’t question adidas’ commitment to making absolutely quality colourways for their modern-heritage cleats, as they prove on the adidas adiPure 11pro – Black / Vivid Yellow / White. 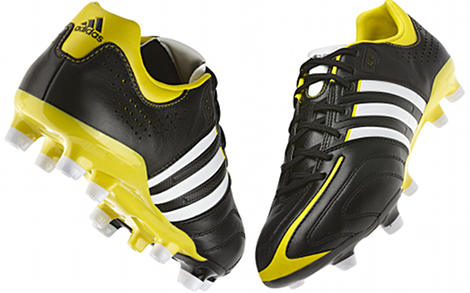 adidas obviously used the classic black and white upper as a jumping-off point when designing these football boots, but a hefty splash of the same vivid yellow as the new F50 adiZero definitely helps to brighten things up somewhat.

The collar, soleplate and toe all benefit from some of the super-bright yellow, giving them a look vaguely reminiscent of the 2010 World Cup adiPure III’s.

The adidas adiPure 11pro – Black / Vivid Yellow / White is one of two new colourway updates for the 11pro – which is the lightest non-SL adiPure ever.

At 226g / 8.2oz, the adiPure 11pro is designed to offer a perfect combination of lightweight performance and player comfort, for players who value touch, glove-like fit and classic styling.

Whereas all other adiPure boots have at least had a vamp made of K-Leather, the adidas adiPure 11pro uses the same Taurus leather as the Predator_X, for a more water resistant forefoot.

Taurus leather is also lighter than K-Leather, which works with the synthetic midfoot and heel to produce a lighter construction than many speed boots.

Integrated into the adidas three stripe branding in the midfoot is the 360-degree support saddle. Working with the lacing to pull the midfoot of the boot flush to the foot, heel slippage is reduced and stability is increased.

The adidas adiPure 11pro is also the first adiPure to be miCoach compatible, allowing amateur players access to professional-standard performance-metrics.

What do you think of the  adidas adiPure 11pro – Black / Vivid Yellow / White? Let us know in the comments, or the boot-o-meter!

ADIDAS ADIPURE 11PRO – BLACK / VIVID YELLOW / WHITE, 8.1 out of 10 based on 11 ratings https://www.footy-boots.com/wp-content/uploads/2012/11/adidas-adipure-11pro-Black-Vivid-Yellow-White-featured.jpg