Rounding off the adidas Champions League collection of football boots for 2012-13 is the understated adidas adiPure 11pro – Black / Infrared / White.

' Whilst it seems we can’t go a whole month without a new F50 or Predator colourway, adidas have been far more reserved when it comes to refreshing their heritage-inspired silo.

Launched in January 2012, the adidas adiPure 11pro' – Black / Infrared / White' is just the 5th colourway release (excluding the two SL variants) to come out over the 11pro’s 9 month life cycle.

And whilst a number of high profile players have swapped the adiPure for adidas’ other two big silos – including Real Madrid’s Xabi Alonso – Bastian Schweinsteiger, Frank Lampard, Santi Cazorla and Philipp Lahm all remain dedicated wearers – indicating they’re a boot that can absolutely perform at the highest level.

Boasting adidas’ signature Infrared colour (which seems to have taken over from Electricity as the favourite hue for football boots at adidas HQ), the adidas adiPure 11pro' – Black / Infrared / White' is a great combination of classic black and a great ‘pop’ colour – reminding us of the adiPure III in Black and Warning Orange.

Unlike that release, however, adidas have opted to cap off the boot with some white on the tongue, stripes and branding on the sole – something we think the release would have been better without! 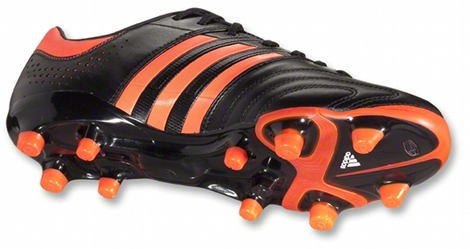 The lightest adiPure to date, the adidas adiPure 11pro' boasts a Taurus leather forefoot for great ball feel and touch when dribbling, whilst the midfoot and heel are a synthetic that improves waterproofing and reduces weight.

adidas have also integrated their iconic three stripes into the functionality of the cleat, with the stripes on each boot forming the 360-degree Support Saddle – working with the laces, this pulls the midfoot snug to the foot, reducing friction and increasing comfort by locking your feet in place.

What do you think to the' adidas adiPure 11pro' – Black / Infrared / White? Let us know in the comments, or drop your score into the boot-o-meter!

Written By
Kyle Elliot
More from Kyle Elliot
We catch up with the Spurs & England Speedster to discuss the...
Read More