After a more-or-less full week of adidas releases, we can finally round things off with the all new adidas adiPure 11pro – Black / Green / White! 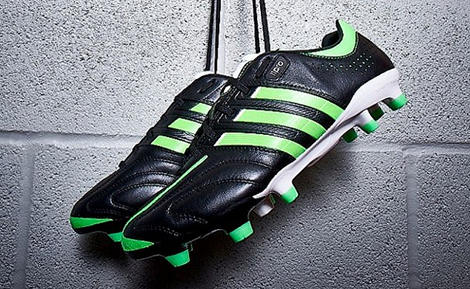 Curiously not part of the Champions League collection that we’ve seen launch alongside the new Finale Wembley 13, the adidas adiPure 11pro' – Black / Green / White' is a bit of standalone release, furthering the 11pro’s place as the ‘black sheep’ of the adidas line-up.

Despite releasing over 14 months ago, the adidas adiPure 11pro' hasn’t really felt like a part of the adidas family in a little while, and – oddly – we haven’t seen any prototypes of a replacement in testing just yet, suggesting it might be around for a little while longer. 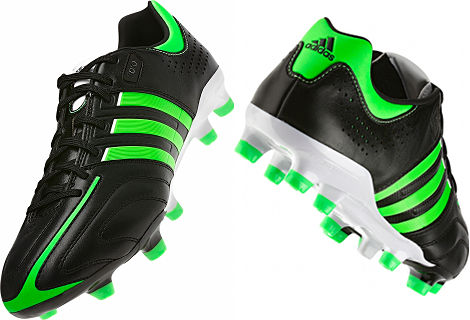 Stars like Xabi Alonso, Edin Dzeko and Bastian Schweinsteiger have moved away from the line over the last year, which could be another sign that adidas are planning a major shake-up for the silo some time soon.

But that’s not to say the adidas adiPure 11pro' won’t have it’s fair share of fans; Premier League stars like Frank Lampard, Michu and Santi Cazorla are all advocates of the series, and could well be wearing the Black / Green / White' colourway soon.

We’re big fans of this colourway, with the bright green-on-black leather styling reminding us of classic 90’s boots from the likes of Lotto, Diadora and Quasar – something we’re sure fellow old-school football boots fans will appreciate!

If we did have one qualm with the adidas adiPure 11pro' – Black / Green / White‘s design, it would be the part-white, part-black soleplate – something we reckon that might have looked better in all-black for a more lethal look, or a truly-retro all-white design.

Let us know what you think of ’em with a comment!

Written By
Kyle Elliot
More from Kyle Elliot
PUMA take a new tact with the evoAccuracy 1. All the power...
Read More