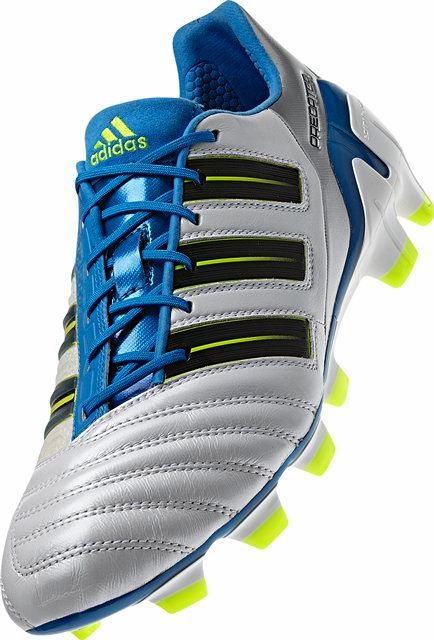 adidas have gone all out with the launch of the new Preds, giving loyal fans of their signature power football boots plenty to think over when deciding which colourway from the range they’re going to buy when they launch soon.

Once again incorporating the bold electricity on the studs and branding, we can only assume that adidas are doing their utmost to push this as something of a ‘signature’ colour for their football boots this summer as it dominates the adiPower and adiZero lines.

We reckon this is a seriously handsome colourway and – like most white football boots – the adidas adiPower Predator – White/Black/Silver would look great with a variety of kits.

Sadly, though, don’t expect to see many professionals wearing them, as adidas revealed to Footy-Boots.com that they will receive no on-field support from professionals (meaning anyone you see wearing a pair will have had to go and buy them themselves!) and will have an extremely limited distribution.

So, whilst these football boots aren’t a limited edition, the adidas adiPower Predator – White/Black/Silver will be produced in smaller quantities than all the other colourways we’ve seen so far.

Which is a real shame given how great they’d look on Kaká’s feet with the current Real Madrid Kit (though maybe not so much with the new Real kit which is revealed next week…).

Our understanding is that the adidas adiPower Predator – White/Black/Silver will not be available at launch, with a release date for this particular colourway still TBC.

What do you think of this colourway?

Written By
Felipe
More from Felipe
Footy Boots reporter Matt reviews the unveiling of Cristiano Ronaldo, who was...
Read More