We’ve seen our fair share of football boots launch events here at Footy-Boots.com, but we’ll be very surprised if we ever see another that’s as star-studded, manic, elaborate and downright fun as that for the new adidas adipower Predator.

Whilst we know that there were some Footy-Boots.com fans at the launch (‘sup Remi!) we also know that the vast majority won’t have been able to make it down for the day, so we’ve put together a highlight reel, and some exclusive interviews with the biggest stars from the day.

Set in a graffiti-covered event space at Brick Lane’s historic Old Truman Brewery, every square foot of the room was dedicated to the Predator and it’s legacy. 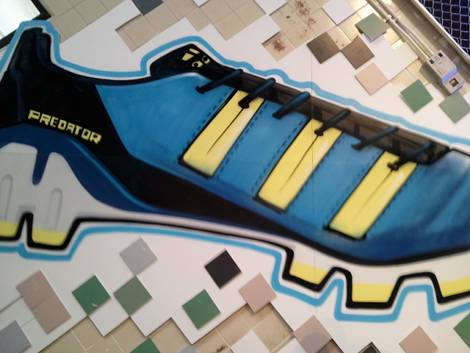 From the Sharp Blue and Electricity seats for the gathered press, to the collection of all 11 Predators to date – including the adidas adipower Predator – no detail had been overlooked in making London the Predator capital of the World (for the day, at least).

The stage was set, then, for 7 internationally renowned players – described by adidas as the ‘next generation’ of Predator football boots wearers’ to answer questions posed for them by the global media.

As you know by now, Footy-Boots.com snagged an exclusive chat with Everton’s Jack Rodwell to talk about his switch from the adiPure to the adidas adipower Predator, but we also have some tasty chats with Nani, Van Persie and KakÄ‚Ë‡ in the video above!

After that, the players were shipped outside to compete in the ‘Call the Shots’ challenge. Equipped with their new football boots, the players split into two teams to try and rack up as many points as possible on the Predator power-themed challenge.

First of all, players were challenged with bending the ball into some oil drums suspended on scaffolding, of which Spain forward Fernando Llorente was the only successful challenger. 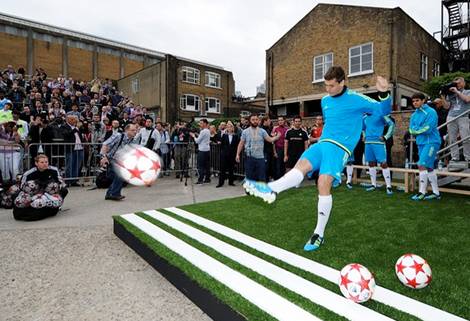 Next, players were forced to unleash the power of the adidas adipower Predator as they smashed the ball the full length of the course, attempting to hit gongs, life preservers and various other targets; which had a much better success rate than the previous challenge with Shelvey, Van Persie and Rodwell on target.

It was all about combining Power and Accuracy next as the race was on to see who would be the first to smash the glass windows at the very top of the course; Nani and Shelvey duly obliged!

And for the final stage of the course, the players were tasked on hitting the ‘grand target’ in the middle of adidas’ seemingly-ramshackle construction. Rodwell was the first, setting off a small fireworks display, but most of the other stars were able to hit the bullseye as the challenge pressed on!

Finally, the inventors of all 50 of the top ideas from adidas’ ‘Call the Shots’ leader-board were invited to don white overalls and indulge their heroes in a game of ‘Football Paintball’. 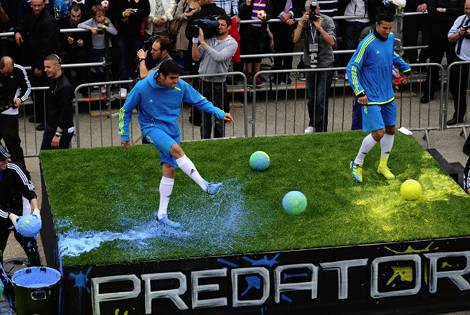 Whilst we’re sure there was some sort of score intended to be kept, the grand finale quickly escalated into all 6 participating players having the time of their lives as they launched paint-soaked footballs at duly-obliging youngsters – in particular – Van Persie, who outlined his intention to ‘go for the knees’ before the event kicked off.

As the final ‘wave’ of participants was let loose on the course, Nani and Shelvey were the first to realise that it was actually more fun to start smashing footballs across the course at their fellow professionals, as you can see towards the end of the video above – it wasn’t long before KakÄ‚Ë‡, Van Persie, Rodwell and Llorente soon started joining in their ‘healthy competition’. 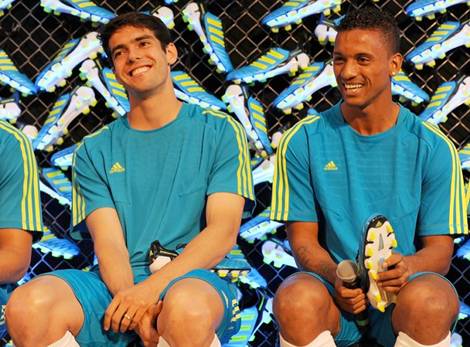 After Kaka ended the day by throwing a paint-covered football into the crowd, leaving a small portion of both the architecture and the population of East London splattered in the adidas adipower Predator‘s now-signature Sharp Blue/Electricity, the day wound down and it was time for everyone to head back.

In a true testament to the fun the pro’s head, Footy-Boots.com saw all of the players ‘backstage’ snapping souvenier photos on their phones, whilst still in their paint-soaked football boots – going to show that even after an arduous season of intense rivalries and matches between each other, there’s nothing that brings the biggest players in the world together than smashing footballs at a bunch of kids!

For exclusive behind the scenes photos of the adiPower launch, click here!

Written By
Kyle Elliot
More from Kyle Elliot
Nike show off two virals; one for Holland and one for Spain...
Read More