Ah Twitter – you’ve been at the centre of so much controversy lately, but this is why we love you. Blackpool midfielder Charlie Adam has leaked the new adidas adiPower Predator on his personal Twitter page this afternoon. 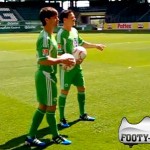 The Tangerine talisman took to Twitter from the Blackpool training ground to show off his brand new adidas adiPower Predator, despite the football boots not having had an official release yet.

Personalised with his squad number and Son’s name – the adidas adiPower Predator certainly look striking in the expected launch colourway of Sharp Blue, and will certainly provide a nice contrast to his orange Blackpool home kit.

Despite us joking previously that the adidas adiPower Predator is the single worst kept secret in the history of football boots, this is definitely the best picture we’ve seen of the upcoming cleat yet.

Some of the interesting technologies that we hadn’t been able to see before include a large amount of ventilation around the collar and sockliner, that we’re guessing makes the adidas adiPower Predator super comfortable to play in. 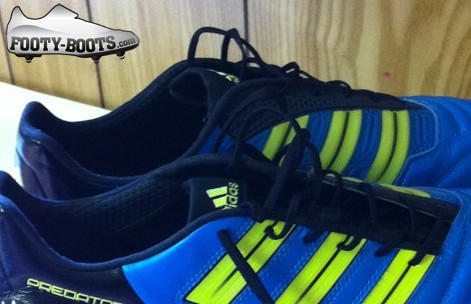 The construction of the chassis definitely seems to be inspired by the adiZero’s SprintFrame, looking to be a one-piece sole that curves up into the heel counter,presumably reducing weight.

The adidas adiPower Predator also seems to employ a ‘two-part’ vamp system, with the Electricity-yellow stripes providing a larger, more aggressive point of contact with the ball, when compared to the low-profile in-between area that encompasses the usual forefoot area.

Perhaps most interestingly, though, is Charlie Adam having these at all! We were expecting to see the adidas adiPower Predator make it’s bow at adidas’ main showpiece of the season – the Champions League Final.

But with Charlie Adam having his pair ‘early’, then we may even see them on the pitch for the final week of Premiership action!

We can’t go any further without thanking Charlie R for submitting the story and Charlie Adam for posting the picture – he’s well worth a follow on Twitter @Charlie26Adam if you have a minute!

Any thoughts on these new, up-close images? Let us know in the comments!