Whilst the yet-to-be-released adidas adiPower Predator has found infamy as the ‘Worst Kept Secret in Football Boots History’, adidas have done a contrastingly exemplary job of keeping the launch colourway under wraps. 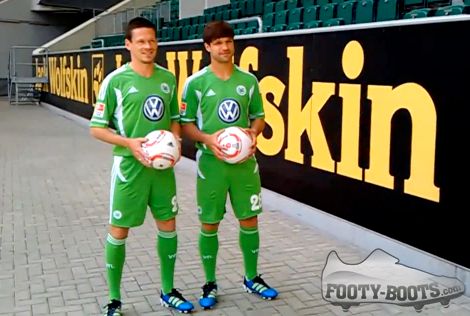 But now it seems that we might have snagged a glimpse of at least one of the launch colourways of the new adidas adiPower Predator at the launch of Wolfsburg’s new home kit.

Whilst we’re sure that Wolfsburg home kit was the focus of the gathered press and fans, we wonder how many of them knew they were in the presence of such a high-profile unreleased pair of football boots?

Either way, this colourway looks to be Predator Sharp Blue/Running White/Electricity ( or Anodised Blue – based on what adidas have called their recent adiZero colourways) and is certainly a striking look for any pair of football boots, reminding us of the Neptune Blue T90 Laser III that was released over a year ago.

It seems that the colourway isn’t the only inspiration that adidas have taken from Nike, given that these are being worn with a brand new kit, we’d have to guess that this is the launch colourway for the adidas adiPower Predator. [hhog_bookmarks] 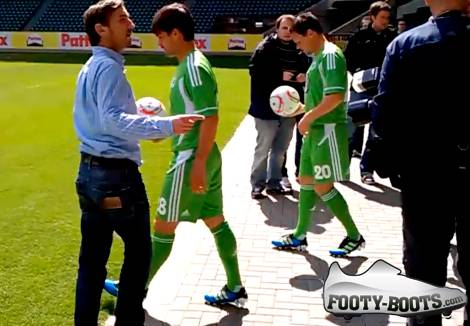 The German brand seeming to have taken a leaf out of Nike’s book and released a camera-pleasing brightly coloured launch model, with the classic Black/White/Predator Red’  potentially a secondary colourway (or potentially not even a launch colourway at all…).

There’s no doubt that this colourway is something that will undoubtedly turn heads on the pitch and on store shelves, so we can safely say this is a smart move for adidas as they seek maximum exposure for the new adidas adiPower Predator.

Though will such a bold colourway cause unrest with the Predator faithful? Should all Predator football boots launch in the classic Black’n’Red?

Or is this adidas being as modern and forward-thinking as possible, with brightly-coloured football boots such big business at the moment?

Weigh in on the debate either here in the comments, on our Official Facebook page or on Twitter where we’re discussing the hashtag #adiPower with our fellow boot-fans!

Huge thanks to Tom Z – who took the time to email this magnificent spot to us here at Footy-Boots.com!