The reason players hold the World Cup in such high regard is not only the fact that it’s once every four years, but every action is preserved in the competition’s history. 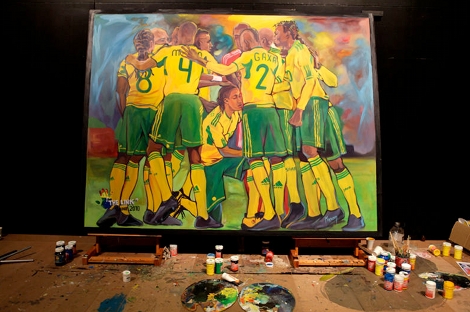 Adidas have been cataloguing some of this actions in a more vibrant way than merely writing it down or recording a statistic – They’ve had two of Africa’s brightest young artistic talents take their favourite moment from the day’s action, and then paint it in their own style.

Starting today, adidas are hosting an eBay auction where fans can bid to own a number of unique lots, highlights include these paintings of players such as Steven Pienaar and Steven Gerrard. 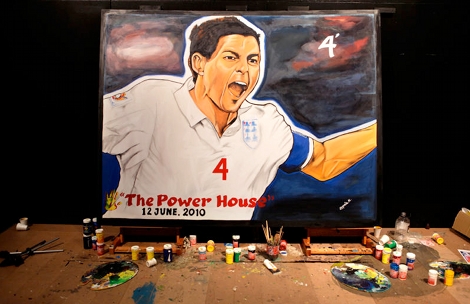 All unique pieces of art have been created by the adidas 2010 FIFA World Cup artist team, Paul Junior Kasemwana and Espoir Kennedy. The two brilliant, up and coming African artists are permanently based at Jobulani Central, adidas headquarters during the tournament and are creating daily paintings which capture those moments on the pitch that make historya wonder goal, a penalty shoot out, pure elation, the pain of defeat, individual brilliance or team effort. 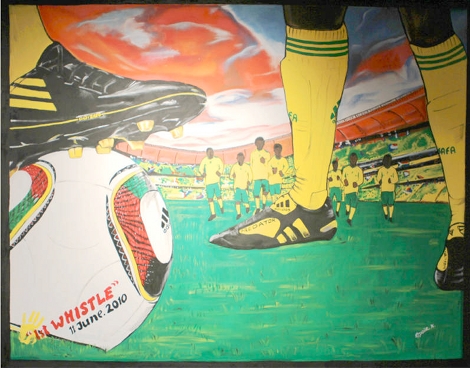 This one’s our favourite – we can’t quite put our finger on why!

It’s not all paintings though.

Each Live Quest painting is 270cm wide by 210cm high. These paintings, alongside 32 individual player portraits and the other limited edition adidas FIFA World Cup lots, will be auctioned via www.ebay.co.uk/adidas46664auction throughout the tournament culminating on Monday the 12th July with the adidas Jobulani FIFA World Cup Final Match Ball. All proceeds go to the Nelson Mandela 46664 Foundation.