David Beckham has been officially unveiled as an AC Milan footballer. The former England captain was presented with his number 32 shirt which he will wear for the duration of his loan period which runs until 9th March.' 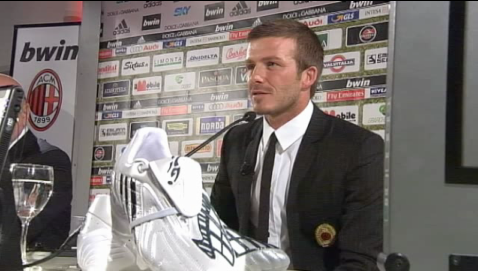 Although' Beckham’s loan doesn’t formally begin until December 29th, the marketing dept at the club and kit sponsor Adidas obviously wanted' the release of' Becks in his new kit as early as possible with Christmas sales in the offing.

So what did the man from LA Galaxy have to say about his move to the San Siro?

On his shirt number:

I will have the number 32 shirt, the reason is that it was the first number the club offered me and I accepted.

On the Italian League:

I am already falling in love with this club, I like its history. One of the reasons behind my choice was this. I have always respected the Italian league for the way they play football, because there is a lot of attention to tactics. In Italy there’s a lot of passion for football and in the past I have had the chance to play against a few Italian clubs and the Italian national team. It will be very exciting.

During the presentation, David Beckham’s new Adidas Predators were seen perched on the table beside him.

Written By
Felipe
More from Felipe
Barnsley 0-1 Cardiff Joe Ledley was on target for Cardiff as they...
Read More