The new agreement will see the Champions League winners wear Adidas branded football shirts until the end of 2017. Under the new deal Adidas will also design, produce, distribute and promote a wide range of non-sport related A.C. Milan merchandising articles. 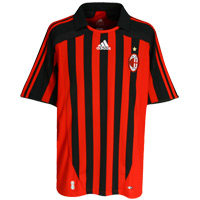 “We have been partners with A.C. Milan since 1998 and this has allowed us to share so many exciting victories. And we are looking forward to many more incredible seasons like this past one,” said Herbert Hainer Chairman and CEO of the Adidas Group.

“Every day Adidas and A.C. Milan will work side by side to create more innovative products and to continue making football the most beautiful sport in the world. A.C. Milan and Adidas are a strong couple. We share strategic visions, internationality and attitude to innovation,” commented Adriano Galliani, Vice President and Managing Director of A.C. Milan. “We started with a traditional supplying contract and today we officially give Adidas the worldwide licensing rights of our brand.”

The news comes barely a week after city rivals Inter signed a similar contract with Nike. Inter’s current agreement with Nike runs until 30 June 2009, and is worth around 9 million euros a season. Under the terms of the new agreement, Inter will wear Nike football shirts for the next ten years in a deal worth between 12 and 14 million euros a season, the biggest contract ever agreed between the football boot brand and a non international football team.

Written By
Felipe
More from Felipe
Aston Villa striker tips his Spurs rival to start at Wembley on...
Read More