Aaron Ramsey gave boot-spotters plenty to talk about this weekend, as the Arsenal midfielder turned out against Hull City in all-black, unbranded football boots as he seeks out a new football boot sponsor deal.

The Welshman caused plenty of confusion this weekend, wearing a completely black pair of football boots which were soon identified as Nike Tiempo Legend V’s with the trademark Nike Swoosh removed from both flanks.

Having worn the adidas Predator much of his senior career with the Gunners, Ramsey seems to be in the process of finalising a new deal with a new football boot sponsor. 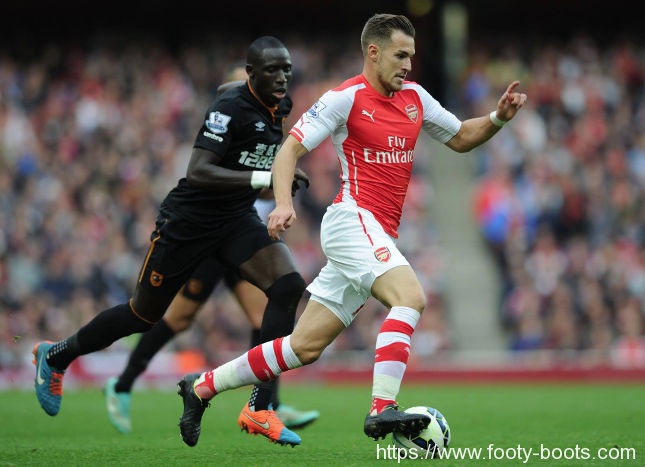 Ramsey has been in fine form over the last twelve months in spite of spells out with injury, so it is somewhat surprising for adidas to have allowed the 23 year old to listen to offers from elsewhere.

Given adidas’ sponsorship of the Welsh national team, we’d also have thought the Three Stripes would have considered Ramsey as a valuable marketing tool in both club and international football. [facebookShare]It’s clear now that Ramsey will not be renewing with adidas as offers are already on the table for him to wear a new football boot brand.[/facebookShare]

The current front-runner is Warrior. The Liverpool kit suppliers have allowed Thomas Ince’s contract to lapse recently, and would certainly see the benefit of giving the ‘Gambler’ silo a fresh face, particularly one capable of Ramsey’s Champions League pedigree.

Current sources suggest that [twitterShare]Ramsey’s deal with Warrior is all-but official[/twitterShare], with the Welshman set to launch a new boot alongside announcing his arrival with the American brand, in the style of PUMA and Cesc Fabregas.

Written By
Kyle Elliot
More from Kyle Elliot
At the London launch of the new Brasil Shirt we stole five...
Read More