1949 saw the formation of the Adidas company by Adolf (Adi) Dassler, after a falling out with his brother. Adidas is celebrating its 60 year anniversary. 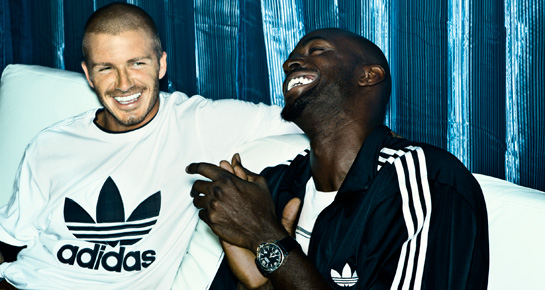 The global football brand began back in 1949 when Adi Dassler registered his company “Adi Dassler adidas Schuhfabrik”, though little did he know that, 60 years later, the brand with the 3-Stripes would achieve the success and worldwide recognition it holds today.

This year, Adidas celebrates its 60th anniversary with a look back at the greatest moments in its history.

It still seems an unlikely story: a modest shoemaker from a small rural town in Germany develops a range of sports products so original and so perfect that they are sought by athletes from all over the world. As he indulges his passion for sport and for innovation, he creates a brand as great as any in the world. An unlikely story, but not impossible. To Adidas, Impossible is Nothing.

May it be Nadia Comaneci’s perfect 10, Bob Beamon’s jump into the history books, the Miracle of Bern or Stefanie Graf’s Golden Slam – Adidas was always a part of the greatest moments achieved on the pitch, the court and the fields around the world, displaying the same passion and innovative spirit Adi Dassler started the company with all those years ago. And it is these stories that still inspire Adidas 60 years later – and will continue to do so for the decades to come.

“Adi Dassler’s interest and passion for sport were the focal point of his life. He regarded it as his task to help all athletes perform better by providing them with the best possible product. Adidas has remained true to this mission for six decades and has thus become one of the best known and most popular brands in the world. The motivation of our company founder and his close association with sport will continue to shape our path in future on our way to becoming the world’s leading sports brand,” says Erich Stamminger, President of the Adidas brand.

Adi Dassler died in 1978, at the age of 78, but his ideas, his efforts and passion still live on today. With new innovations, new divisions and new developments, Adidas still relies on its founder’s motto which is now represented by the brand’s attitude: Impossible is Nothing.

Displaying Adidas’s command in the world of football today, the company has just announced a 5-year, £5million per annum kit deal with the Scotland national football team.

Scotland’s six-year, £1million per year relationship with Diadora was terminated last month, after the Italian kit suppliers went bust and although Scotland will continue to wear Diadora shirts for the two remaining World Cup qualifiers, the deal with Adidas, which will be the biggest in the Scottish national team’s history, will come into effect after the 2010 qualifying campaign.

For more news about Adidas and all other kit manufacturers visit FootballShirtCulture.com

Written By
Felipe
More from Felipe
Specially for Christmas, Footy Boots has got it's hands on some exclusive...
Read More