Whilst we’re used to seeing Nike’s Mercurial range going for a premium price and boasting a wild design, there definitely hasn’t been a Mercurial Vapor VIII' like this before!

These crystal-covered cleats come courtesy of' Pierre Emerick Aubameyang – an AS Saint-Etienne player, who wanted a special pair of boots to mark his club’s big game against Lyon last weekend.

Whilst these extra-special' Mercurial Vapor VIII failed to inspire' Aubameyang' to victory, as ASSE fell 1-0 to the Ligue 1 leaders, they’re definitely still a sight to behold.

Created using over 4,000 crystals, these were a bespoke creation from French company Orravan designs. 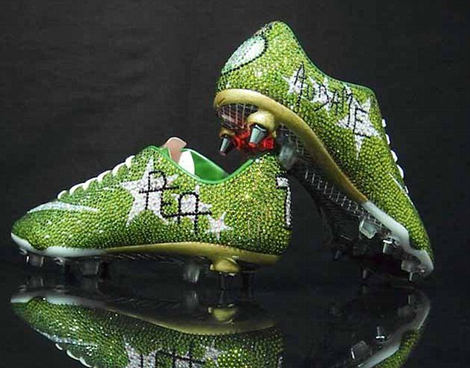 You might remember the name, as they’re the same design house that worked on Mamadou Sakho’s Swarovski Superfly‘s from early 2011 – we can only imagine the company is inundated with footballers with wallets full of cash to burn on sparkling soccer boots/

Painstakingly styled around the Nike ticks, Orravan also included Aubameyang’s initials and some stars in the design.

And whilst the Gabon international didn’t wear them for the crunch tie against Lyon, as you can see he did take to the pitch in them for the warm-up – ' something we don’t think we’d dare do if we’d just paid £2,500 for a pair of boots!

What do you think of Pierre Emerick Aubameyang’s boots?