After being spotted on the feet of Liverpool skipper Steven Gerrard, we got an up-close look at the new incarnation of the legendary adidas Predator over the weekend.

The property of AC Milan midfielder Riccardo Montolivo, this image gives us a great up-close look at a blacked-out version of these upcoming boots from the three stripes.

After being pleasantly surprised by one of the most talked-about Predators in recent memory, it’s no big shock to see adidas sticking with a similar-looking layout for the next incarnation.

On the image from the AC Milan locker room, we can see that the ‘Dribble’ and ‘First Touch’ zones are very much intact from the current generation of Predator, however a new texture has been added.

The current LZ very much relies on ‘strips’ of SL rubber to construct the zones on it’s upper, presumably to help keep the upper flexible. However, adidas’ engineers have clearly ' been doing some tinkering, as the boot’s theme now seems to be ‘pixels’ of' tessellating' crosses and angular shapes. 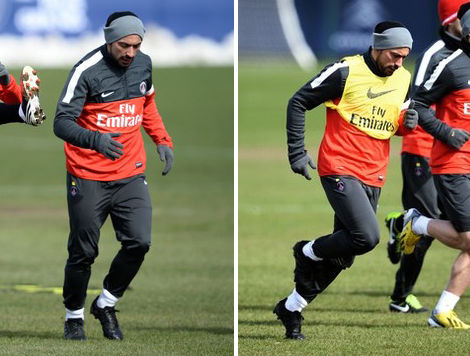 Elsewhere in the world of adidas, Argentine international' Ezequiel Lavezzi took to training with PSG wearing another blacked-out pair of football boots.

Instead of the new Predator, the former Napoli man is testing another new boot from the German sports giant – previously spotted on Bastian Schweinsteiger (amongst others) – this new model is rumoured to be focused on energy return. We can’t wait to see what adidas have in store for this rumoured 4th silo.