Research commissioned by the EDF Energy London Eye today reveals the most iconic moments from throughout the Queen’s reign as voted for by the Great British public. 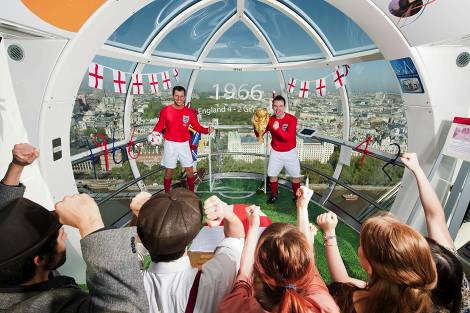 England winning the World Cup in 1966 has been voted the most iconic moment since the Queen’s Coronation in 1952 said the survey today commissioned by the EDF Energy London Eye, an event which Her Royal Majesty actually attended herself.

In celebration of the survey’s outcome, the London Eye has transformed one of its 32 capsules to bring back to life the magic of England’s victory in 1966.

The bespoke capsule will be complete with 1966 football memorabilia including a replica of the Jules Rimet Trophy, the team’s gleaming medals as well as the England’s mascot ‘World Cup Willie’ which will transport guests back to this triumphant moment.

Visitors to the London Eye between Saturday 26th May to Tuesday 5th June will have a chance to experience a rotation in the one off 1966 World Cup bespoke capsule.

Whilst we’re undoubtedly happy that the most historic day in English football has been voted as the most iconic, we’re not sure what the Scots would have to say about it being the epitome of Britishness…!